This is my Memorial Day tribute to my 2nd great grandmother, Elizabeth Ericksen Nielsen,who I know very little about. I'm enjoying learning how to make these videos using Adobe Voice. 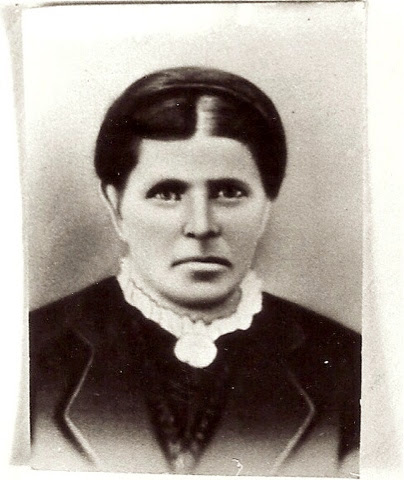 For this week's post, I decided to use my iPad and the new Adobe Voice app to create a video for my 2nd great grandfather, Andrew B Nielsen. It was really fun and easy to do, once I had gathered all the pictures and figured out what I wanted to say. I even got my son to narrate it for me. I can't get the embed code to work on this blog, but below is the link to the video.

Email ThisBlogThis!Share to TwitterShare to FacebookShare to Pinterest
Labels: 52 Ancestors in 52 Weeks, Andrew B Nielsen 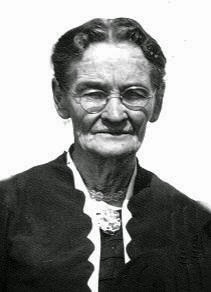 My father was only a toddler when Finnetta passed away, but he can still remember crawling around on her floor. He remembers that she was a very nice lady. Here's what others have written about her:

(from Find a Grave Memorial)

Finnetta Ann Williams Allen was born August 30, 1860, in Hyrum, Utah, to William Williams, Jr. and Margaret Pettigreen Hope Williams. She was the first white child born in Hyrum after it was founded, and was the third of 9 children. Her father was a polygamist and had one other wife, so Finnetta had other half-brothers and sisters.

Finnetta received very little formal education in her life. As a child, she and her sister alternated attending school after paying a single tuition, because her family had very little money. Although her education was meager, she did much to educate herself by reading good books and acquainting herself with current events. As a child, she worked hard to help her parents by gleaning wheat, digging sego roots for meals, and mnaking lye from ashes that was used to make soap. She also gathered wool from off the brush and fences, which was then washed, dried and spun into yarn.

Finnetta was a petite woman and always cheerful and pleasant to be around. She has been described as being loving, modest and charitable. She loved flowers and gardening and often shared her flowers with her friends or with someone sick or lonely. As a young woman, she learned many homemaking skills from her mother. She became a beautiful dressmaker and seamstress and also enjoyed making many quilts. 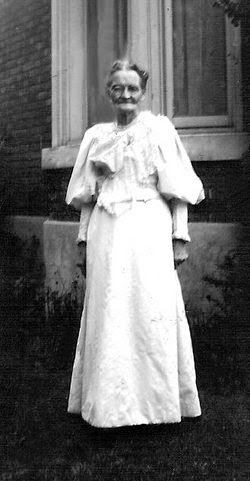 Finnetta was a religious woman and was always willing to do what she was asked to do. Her church callings included Primary President, counselor in the Relief Society presidency twice, and Relief Society President. Finnetta loved to go to the temple. Even with the distance she had to travel to get there in a horse and buggy, and with her large family to care for, she completed 715 endowments in the Logan Temple during her lifetime.

After their 7th child, Pearl, was born, Albert was called to serve a 2-year mission to the Northern States. While he was gone, Finnetta cheerfully and willingly cared for her young family with very little money to live on. After Albert returned from his mission, they had 2 more children.

Finnetta had a beautiful singing voice and sang in her ward choir for more than 55 years. She was also the first president for the Daughters of the Utah Pioneers in Hyrum.

She died on Dec. 22, 1943, at the age of 83. Her last words to her children, who were at her bedside when she died, were "God bless you, and always keep the faith." At her funeral, one of the speakers said, "No cleaner hands ever entered into death, and no sweeter woman ever lay down in final sleep."
Posted by Scott at 8:07 AM No comments:

Most of this was taken from Albert's Find a Grave memorial:

Albert J. Allen was born April 26, 1855, in Cedar City, Utah, to Ira Allen & Keziah Benson Allen. He was the second of 7 sons in his family. His father, Ira Allen, was the founder of the city of Hyrum, Utah, and was also a polygamist with 3 wives, so Albert or "Ab" as he was often called, had many half-brothers and sisters as well.
Ab was 6 years old when he moved to Cache Valley with his family. At the age of 15, he learned from his father how to be a shoemaker. Later he acquired skills in carpentry, electrical work and plumbing. He was a hard worker and very industrious. He even raised colts for awhile and also tried his hand at mining in Arizona for a short time. As a young man, he played the bass drum in the town band.
At the age of 21, he married Finnetta Ann Williams on Feb. 5, 1877, in the Endowment House at Salt Lake City, Utah. She was only 16 years old at the time.
They were blessed with 9 children:
After their 7th child, Pearl, was born, Ab was called to serve a 2-year mission for the LDS Church in the Northern States Mission. Even though he had to leave his family, he did not question the call. He took all the money he could gather when he left, which amounted to $375, and was never sent another cent while he served. After he returned home, he and Finnetta had their last 2 children.

Ab served on the Hyrum City police force and was later elected City Marshall. He also served on the Hyrum City Council from 1908-1910.
For many years, Ab used his carpentry skills to make many of the coffins for the people who died in Hyrum. He became expert in planing and sawing all shapes of fancy wood ornaments and turning and grooving posts. He had a large wood shop built behind their home where he did much of his carpentry work. As a rule, he received 15 cents an hour for his work, and usually worked 10 hour days. He often smelled of freshly cut wood that he worked with.
Ab and his son, Silas, were recognized as two of the three main carpenters for the new Hyrum First Ward Chapel, which was finished in 1905.
People who knew him well described him as being religious and exacting; often times quite stern. Others described him as being strong and steadfast.
Ab never owned an automobile. Along with that, he refused to have an indoor toilet put in his home; he said that toilets did not belong in the house.
He was ordained to the office of Seventy in the LDS Church and was sustained as one of the presidents of his quorum before being ordained to the office of High Priest.
He enjoyed raising a large garden and was very proud of his cantaloupe and watermelon crop.
Towards the end of his life, Ab suffered a stroke and spent much of his time resting in bed. Though he was confined to bed, he could always find a peppermint in his pocket for his grandchildren when they came to visit. Some of his grandchildren called them his "high-priest mints."
Albert died on April 14, 1932, just before his 78th birthday.

Hazel Bryce Ashton ("Nana" as we knew her) was the only great grandparent of mine that I can remember. She passed away on May 13, 1985, a few months after my grandpa Allen passed away. I was a senior in high school at the time.

Hazel was the granddaughter of Ebenezer Bryce, Mormon pioneer from Scotland, who built the Pine Valley Chapel and the namesake of Bryce Canyon National Park. She was born in Henrieville Utah, but moved to Price, Utah shortly after she was born (by 1900 Census, age 2 or 3). She married Clarence Ashton in Roosevelt, Utah on October 10, 1916 and spent most of her life in Roosevelt. Her husband, Clarence owned a a hardware store in Roosevelt and several family members, including her father, William Bryce, son in law Bennie Schmiett, daughter Evelyn, and granddaughter Linda worked there.

Hazel and Clarence had a daughter, Helen who was born and died on February 27, 1919. Their only other child, Evelyn Hope Ashton, was my maternal grandmother.

Some time after her husband Clarence passed away, she moved to Salt Lake City and had a condo at Three Fountains East. I remember going to visit her there and they had a duck pond behind the condo that my sister, Wendy and I liked to walk around. I remember as a child, I always thought that Nana looked really old (she was). Her skin had a lot of wrinkles and her voice was shaky. But she was a pleasant woman and I liked going there to visit.
Posted by Scott at 7:42 AM No comments: 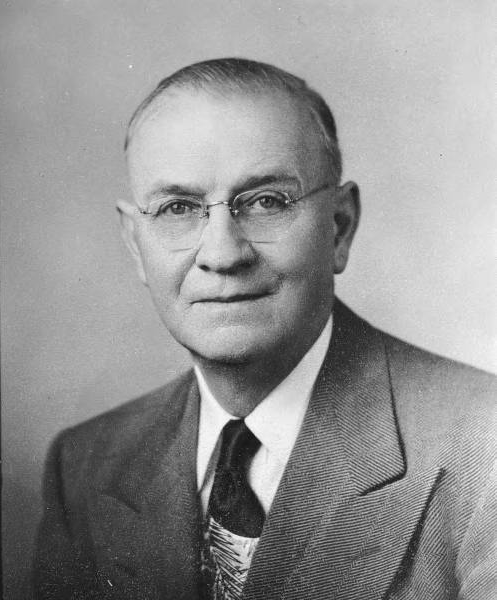 I was only five years old when my great grandfather, Clarence Ashton passed away, so I don't remember much about him, other than we knew him as "Pop" and that he was a smoker (a chain smoker, according to my mom). Clarence was the eldest of the three sons of the entrepreneur Leslie Ashton of Vernal, and owned a hardware store in Roosevelt, Utah. At one time they sold groceries as well, but it was primarily a hardware store. Several family members worked at the store at one time or another (his father in law, William Bryce, son in law, Bennie Schmiett, his daughter, Evelyn, and my mother).

Clarence and Hazel Bryce were married October 19, 1916. They had two children, but only my grandmother, Evelyn lived to adulthood.

In addition to being an entrepreneur, Clarence was very active in civic affairs. He served as the postmaster, the mayor of Roosevelt for two terms, and was appointed state senator in 1951. He was well-educated and was a graduate of the University of Utah and the Law School of the University of Michigan at Ann Arbor. Clarence was a Former Master Mason of the Basin Lodge and a president of the Roosevelt Lions Club.

He is buried in the Roosevelt City cemetery in Roosevelt, Utah.

http://scottallen.wikispaces.com/Clarence+Llewellyn+Ashton
Posted by Scott at 6:51 PM No comments:

The subject for this week's blog post is my maternal great grandmother, Hester Abiah Beckstead.

Hester Abiah Beckstead was born August 21, 1890 in West Jordan, Utah to Hyrum Beckstead and Abiah Russell Robbins Beckstead. She was the 6th of nine children born to Hyrum and Abiah.

I know very little about Hester or her family. She met a baseball player from California (Ben Schmiett) and they were married May 12, 1914 in Salt Lake City. My grandfather (Bennie Schmiett) was born January 30th, 1915. I'm not sure if my grandfather was born a little early, or he may have been conceived out of wedlock. In any case, I'm sure that the Beckstead family (devout Mormons) were not all that excited that their daughter was marrying a gentile baseball player from California.

After Hester and Benard were married, they lived for a short time in California, where my grandfather was born before moving back to the Salt Lake Valley near Hester's family and settled in Midvale, Utah. I have a letter written by Hester to one of her brothers back home, where she talks about meeting the LDS missionaries in Los Angeles and Ben's folks not being very excited about her blessing my grandfather in the LDS church, but he did give her permission because that was what she really wanted.

Ben and Hester raised three children: Bennie (my grandfather), Fay, and Stan. Ben was a moisture foreman at the U.S. Smelting plant, and played on and managed the baseball team there. Hester passed away at a young age (48) of chronic endocarditis and myocarditis in 1938. Ben passed away 11 years later of a heart ailment at the age of 60. Ben and Hester are both buried in the Midvale City Cemetery. 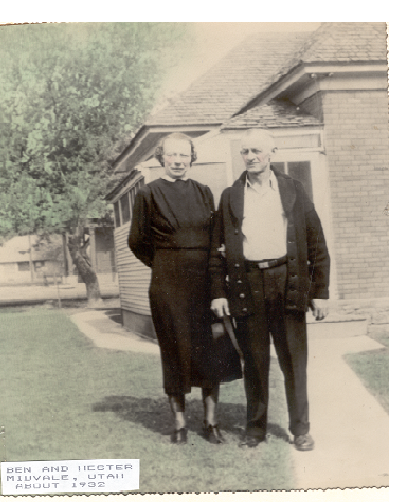